It's been an unpleasant Friday for me today, but proves the importance of blocking asshats without giving in to the temptation to say something first. Following are four Twitter screencaps with matching URLs so you can look them up yourself and some comments about them and an article reference. 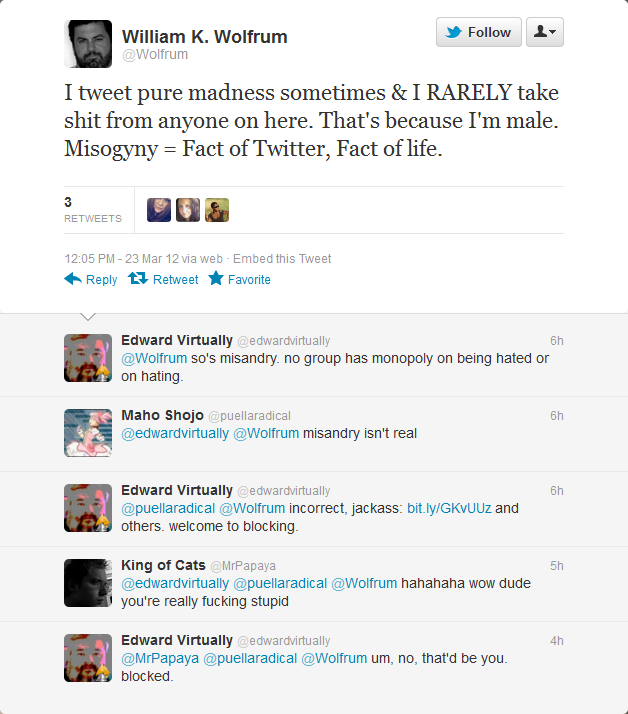 The world is full of misogyny (hatred of women) as the GOP keeps making so blindingly obvious. It also has misandry (hatred of men) in it, though this is not so blindingly obvious nor frequent. The article referred to (http://bit.ly/GKvUUz) documents a case in Canada in 2009 where a woman came up behind a man she didn't know and kicked him so hard in the testicles that one ruptured and had to be removed. Were the genders reversed -- that is, a man came up behind a woman he didn't know and sexually assaulted her to the point of permanent injury -- I doubt the morons in the following tweet chains would argue if I described it as an example of misogyny, and therefore it is just as valid an example of misandry when they aren't reversed. So as far as I'm concerned the "misandry isn't real" remark is blatantly false and I said as much. Obviously I could have said it more politely, but I don't appreciate smart-ass comments by people who are obviously full of shit, especially when I provided an URL which proves it. 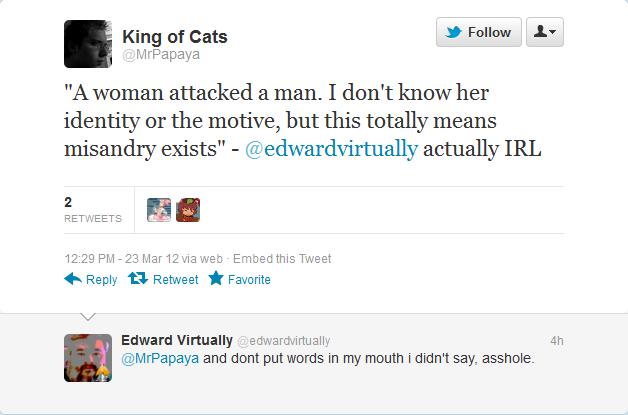 What I dislike far more are smart-asses who are too stupid to admit they're wrong or understand why they're wrong, and instead make up a straw man claim I never made. And in this case compounded it by putting it in quotes, which makes it not only inaccurate but libel as well. This was followed by this from someone I assume is a friend of the first smart-ass. 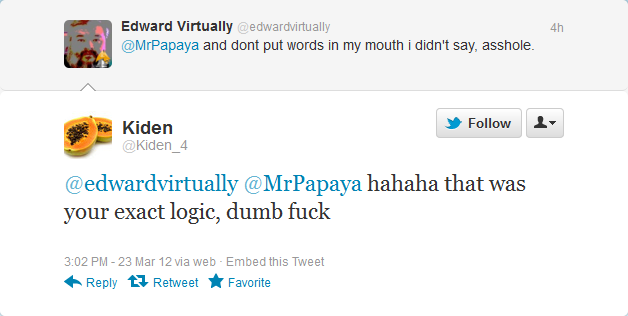 But not content with that, they then tweeted the following falsified quote they attributed to me. 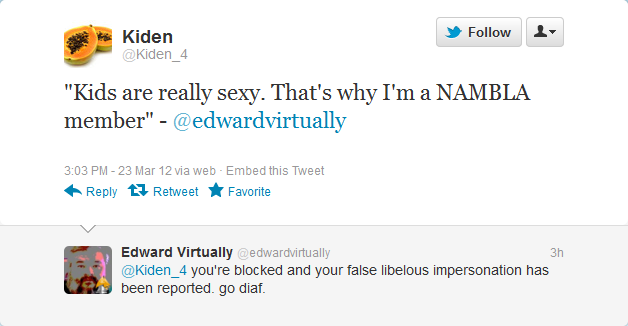 As this point, I filed a complaint with Twitter. If it's not ok for Limbaugh to claim someone is a slut, it isn't ok for someone to put words in my mouth to the effect I'm a child molester. As those who follow my stream regularly understand, I take gender politics extremely seriously, take extreme offense at this libelous remark and am very angry anyone could possibly read it and think those were really my words. Which is the point of this post for the most part, so if anyone *ever* brings up those falsified quotes, I can prove what the truth is.

The above is why I am increasingly draconian in blocking people who tweet or @ offensive things into my stream. They make me very tempted to respond, and I don't need and can't cope with the kind of stress it generates. From now on, I will not respond at all beyond blocking without warning. It's not fair, perhaps, but my right to not be triggered and libeled by assholes is more important.
Subscribe
Comments for this post were disabled by the author